Sondra Beram is one of the smiling faces you’ll find behind the counter at North Bondi’s popular bRU Coffee.  As owner and operator, Sondra has been successfully helping customers move away from disposable to reusable cups for their caffeine fix. We spoke to her about this as well as and a big idea she’s hatching with another notable local – New York Times bestselling author and climate motivator Sarah Wilson.

What have you done to reduce single use plastic in your business?

I started a mug library in August 2018 where customers can take a mug to return later instead of a disposable cup for their takeaway coffee.  I bought cups from Vinnie’s to keep it affordable and low impact.

What was the response from your customers to the cup library?

Initially customers were slow to catch on that the mugs from the library needed to be returned, or they’d hold onto a few mugs and bring them back all at the same time, but now they really get it and we get asked if they can donate their own cups. It’s funny, a lot of people get attached to specific cups and will ask ‘where’s my cup?’.

One of the surprising impacts has been that customer are bringing in their own mugs from home. Not fancy Keep Cups, but regular crockery. They have realised that coffee tastes great from a real cup. The mug library helped establish new behaviours and we all know coffee drinking is very habit based. 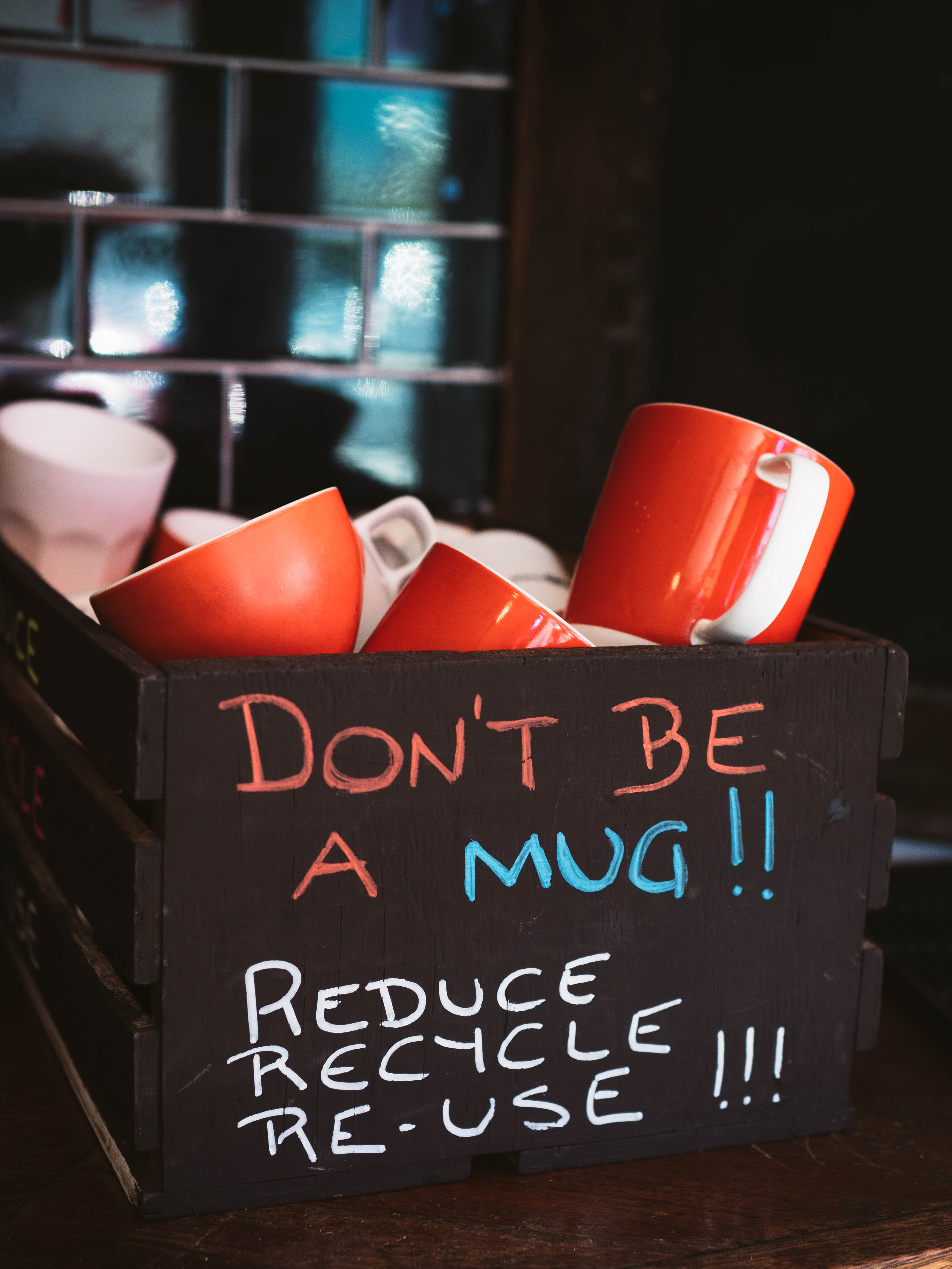 What’s been the waste impact of starting a mug library?

I’d estimate that now only 30% of our coffee sales are in disposable cups, and 70% are in reusables, whereas previously it was the other way around. This saves us space and the cost of buying the disposable cups and it also reduces the amount of waste that we generate, which saves on disposal costs. It’s been win-win. It’s been so successful that we also introduced a bowl exchange.

What about those who insist on eating and drinking from disposables?

There will always be some who insist on using takeaway disposable cups, but this is a smaller and smaller proportion of our sales now.

We switched to compostable cups, utensils and packaging for takeaway purchases, and organised a food and organics collection service. All of what used to go to landfill goes to a commercial compost facility. It was very simple to find a supplier and it makes our source separation very easy.

How have staff handled the changes?

Staff have embraced the changes. 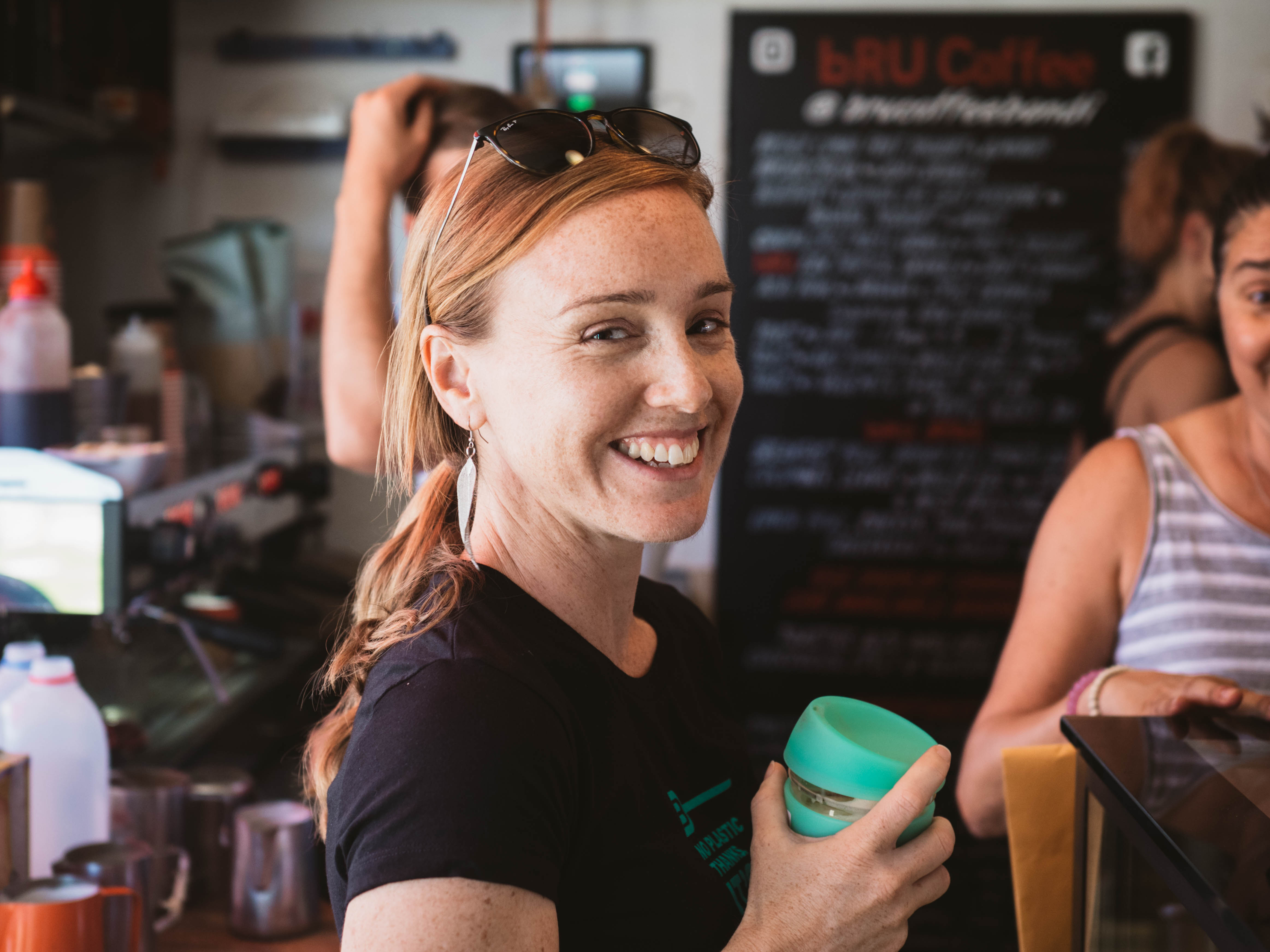 What was the reason you initiated these changes in your café?

Hello, look at what we’re doing to the environment! Everyday we’re watching stuff being washed up in one of the most beautiful places in the world. I don’t want to walk amongst that. It’s impacting on turtles and other animals.

What would you say to other businesses who are considering a similar move?

Just do it. Most of us are overthinking it. Take on one change, then keep going.

You’ve been organising something big. Can you tell us about BYO Cup Week?

Bondi BYO Cup Week came about when I heard Sarah Wilson in an interview refer to the staggering waste coming from cafes, especially disposable cups, and that “it only takes one café to do something”. My first thought was- bRU Coffee will be the first! I was happy to take on a challenge of reducing our waste even further. We already had a well-used mug library, had installed a juggler to get rid of plastic milk bottles, and had taken our coffee packaging to zero by using 4kg refillable coffee tins.

I wanted to do something as a café community. I believe in the power of numbers and that a community can do much more rather than just one café. I called Sarah and a couple of cafes to get some feedback - it was positive. Bondi BYO Cup Week was born. Now almost half of Bondi cafés to have committed to banning takeaway cups for the week, which will save more than 35,000 single-use disposable cups from landfill.

How does BYO Cup Week work?

From 3-11 July, or for as long as possible, cafés will ditch single-use cups and serve their coffee three ways all week: using “keep-cups” customers bring from home, a mug library provided by the café, or encouraging people to take a moment and drink their coffee in-café.  There are tips and fact sheets available on https://responsiblecafes.org/byobondi

What can we do as a community to support BYO Cup Week?

Simple, ask your local café to join BYO Cup Week. Follow @BYOcupweek on Instagram and tag your local. And don’t forget to bring your cup!

If you want to get involved as a participating café, please contact Sondra on [email protected]

community waste & recycling Work
Please check your e-mail for a link to activate your account.